Jerusalem (CNN)Palestinians and Israeli forces clashed in and around the al-Aqsa mosque in Jerusalem’s Old City for hours on Friday morning, before an uneasy calm returned to the city later in the day.Videos shared on social media showed serious unrest and violence at the entrance to the mosque building from before sunrise with Palestinians throwing stones and firecrackers and Israeli security forces firing what appeared to be stun grenades and tear gas.There were also early clashes at the Lions’ Gate entrance to the Old City.

By mid-morning, the Palestinian Red Crescent said more than 150 people had been taken to hospital with injuries from rubber bullets and stun grenades, as well as wounds sustained from beatings by police.

Palestinian demonstrators clash with Israeli police at Jerusalem’s al-Aqsa mosque compound on April 15, 2022.Among those injured was a cameraman, Rami Khatib, who suffered a broken hand. Video shows him being kicked and beaten by police officers.Earlier, police released CCTV video showing masked men apparently preparing for clashes overnight by smashing up rocks and gathering them in black buckets.Police said several officers were taken to hospitals after they were hit by rocks.

Following initial clashes on the compound and at the doors to the mosque, Israeli police entered the building around 9:30 a.m., as evidenced by numerous social media videos.

As violence spikes, the killing of an unarmed Palestinian mother highlights awful toll of occupationWorshipers could be seen lying on the ground apparently detained, as dozens of police stood over them.Other videos show heavy smoke inside the mosque and the constant sound of firecrackers and stun grenades going off.Israeli police said they made more than 300 arrests inside the mosque but insisted they had only entered the compound because those throwing rocks were jeopardizing safe worship.At the Damascus Gate entrance to the Old City, one of the main entrances for Muslims on their way to the al-Aqsa mosque, police briefly prevented people from entering. 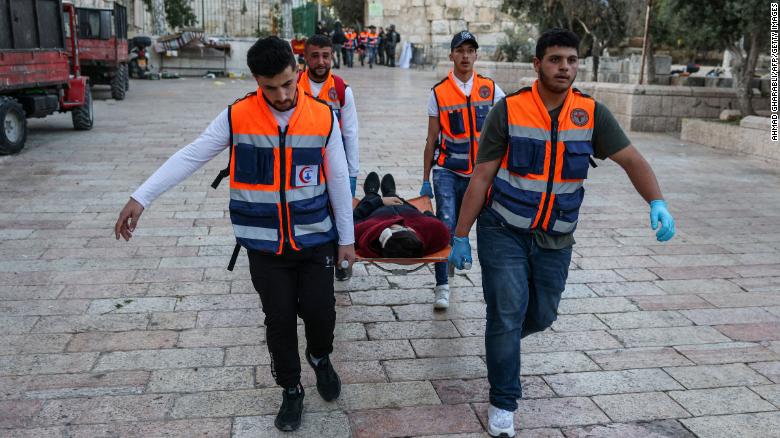 Rescuers evacuate an injured man as Palestinian demonstrators and Israeli police clash at Jerusalem’s al-Aqsa mosque compound on April 15, 2022.Earlier, at entrances to the mosque compound, police were allowing older men and women to enter, but preventing young men from joining them.In a statement, Israeli police said violence broke out at 4 a.m. local time Friday (9 p.m. ET Thursday) when “dozens of young Palestinian lawbreakers, some of them with heads covered, began to march around Temple Mount, with Hamas and Palestinian Authority flags, letting off fireworks and throwing stones.”Israel’s Foreign Minister, Yair Lapid, paid tribute to security forces, saying they had acted with sensitivity and determination, adding, “The riots this morning on the Temple Mount are unacceptable and go against the spirit of the religions we believe in.”While tensions have been very high in Israel and the West Bank in recent weeks, following a series of violent attacks and incidents, Jerusalem itself has been calm.Fears of possible clashes in the city had been growing however, following comments over the last week by both Jewish extremists and Palestinian militant groups. 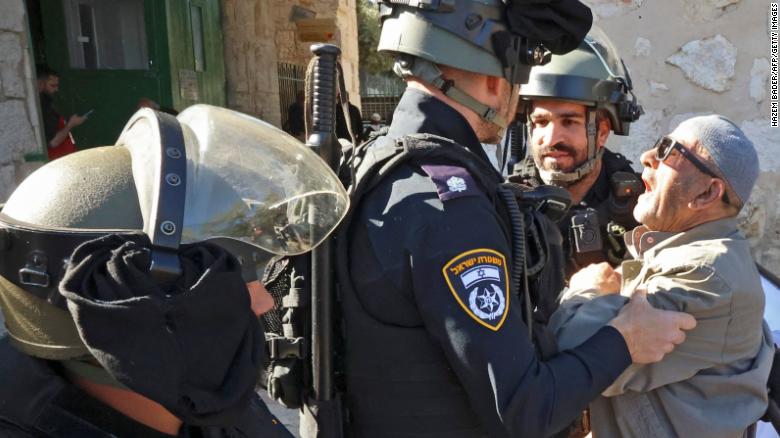 Israeli security forces scuffle with a Palestinian man as he tries to enter the al-Aqsa mosque compound to attend Friday prayers, on April 15, 2022.Hamas has accused Israel of a series of provocations in Jerusalem, most recently calling on Palestinians to defend the mosque “with all possible means” after an extremist Jewish group called for an animal sacrifice on the Temple Mount to mark the start of Passover, which begins Friday.The Rabbi of the Western Wall Friday morning called on Muslim leaders to act to stop the violence, as well as repeating his opposition to the raising of an animal sacrifice to the Temple Mount.In addition to recent events, the coincidence of all three of the main Abrahamic faiths celebrating an important religious holiday on the same day only seemed to up the ante further.While Muslims are marking the second Friday of the holy month of Ramadan, and Jews are preparing for the start of the Passover holiday, Christians from Western churches are marking Good Friday. From early morning, small groups could be seen making their way through the Old City towards the Church of the Holy Sepulchre, which Christians believe stands on the site where Jesus was crucified.But Friday morning’s scenes have brought back memories of one year ago, when violence in Jerusalem was seized on by Hamas who fired rockets at the city, triggering an 11-day war between militants in Gaza and the Israeli army.The violence of the morning had prompted sharp criticism of Israeli forces’ actions, in particular the decision to enter the mosque building wearing shoes, which is seen by Muslims as deeply disrespectful.

Three deaths in separate incidents highlight sky-high tensions in Israel, West BankThe presence of Israeli police inside the Aqsa mosque compound is also regarded as putting a strain on a “status quo” agreement between Israel and Jordan governing arrangements at the religious site.Jordan’s Foreign Ministry condemned what it described as the storming of the compound, calling it a “flagrant violation.”A spokesperson for the Palestinian Authority Presidency called it a “dangerous development.”The United Arab List, one of the eight parties in Israel’s governing coalition, spoke of the sanctity of the mosque being violated.But against the worst fears of many, the afternoon was calm, and so it remained well into the evening, with later prayers at the mosque ending peacefully.Hamas — after earlier in the day calling for “mass mobilization” to defend the mosque and warning Israeli leaders “against continuing their aggression” — later released a statement very different in tone, suggesting urgent communications between key regional players during the day might have helped tamp down tensions.

The evening statement said Hamas leader Ismail Haniyeh had discussed the situation in Jerusalem with senior Egyptian intelligence officials and the UN’s Middle East envoy Tor Wennesland, who had “called on all parties to work on containing the situation in the holy city.”Haniyeh told the UN official that Palestinian worshippers should be “allowed free access to the mosque and not be attacked by Israeli occupation forces,” the statement said.

Get updated from the latest posts straight to your mailbox!

With countless members spread across the world and over a million branches, Our goal is to locate you no matter where you are so we can join hands in worship, study the word of God and grow in the spirit, as we await the second coming of our Lord Jesus Christ.

Jesus Christ is the only key to Salvation

APOSTOLIC EXCERPT FROM THE CHAIRMAN PART 2